Curated conversations to engage with emerging issues and to gain practical knowledge from eminent speakers in the industry. Internationally focused, the series intends to provide fun and engaging insight into career development for mid-tier professionals and above.

Impact producing describes the combination of distribution, community outreach and audience engagement in an “impact campaign” that allows works to reach a broader audience and amplify influence.

It allows works to not only reach, but resonate, with new audiences. Insider Knowledge: Against-the-odds triumph – The making of I am Woman 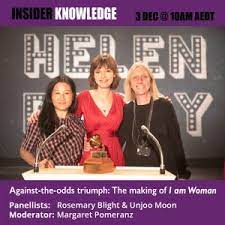 Another insightful webinar from Dame Changer: Margaret Pomeranz talks to Unjoo Moon and Rosemary Blight about the film, the team and the distribution strategy for I am Woman.

There were enormous hopes for its performance in Australian cinemas. By July, I am Woman had become one of a growing list of local and international films to announce the move to bypass cinemas due to Covid restrictions and to debut on a streaming service – in this case, on Stan in August.

Margaret Pomeranz talks to Director Unjoo Moon (The Zen of Bennett, Sorrow’s Child) and Producer Rosemary Blight (The Invisible Man, The Sapphires) about the many years of creativity, perseverance and hard slog it took to bring the film to the screen, about what it took to make the tough decisions about distribution, and how the film has performed.

We’ll touch on the creative, commercial and cultural differences of making films for online services rather than cinemas and the potential impact to the industry should the proposed legislative changes to feature film funding be ratified. 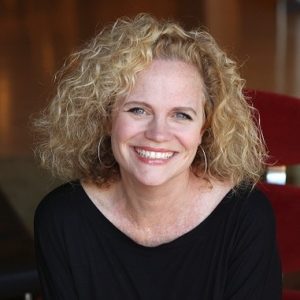 Judi Levine will offer a unique opportunity to gain knowledge about the US film industry, including working with studios and the indie film sector, and honing the skills required to prepare for the AFM and other international film markets.

The one-day seminar brings together a diverse range of industry leaders and experts to discuss current trends in international and domestic markets.

Judi Levine –Producer of The Sessions starring Helen Hunt, John Hawkes and William H. Macy won numerous awards including audience awards at Sundance, San Sebastian and Mill Valley. Both Helen and John were nominated for Golden Globe awards, and Helen was nominated for an Oscar. Her most recent film The Catcher was a Spy starring Paul Rudd, Paul Giamatti and Guy Pearce, premiered at the 2018 Sundance Film Festival and opened across the US to critical acclaim this past June.

Working in the International Market vs the Australian Market
10:45am –11:15am

The Sessions Case Study
Despite Market Transitions, Much of the Process and Challenges Remain the Same
1:30pm – 2:30pm

Writer/Director Ben Lewin discusses his Experiences Working in the International Market
Features: The Sessions; Please Stand By; The Catcher was a Spy
TV: Ally McBeal;Touched by an Angel;Speechless
3:30pm – 4:15pm